Cry Freedom – about the fight against apartheid in South Africa, by Richard Attenborough 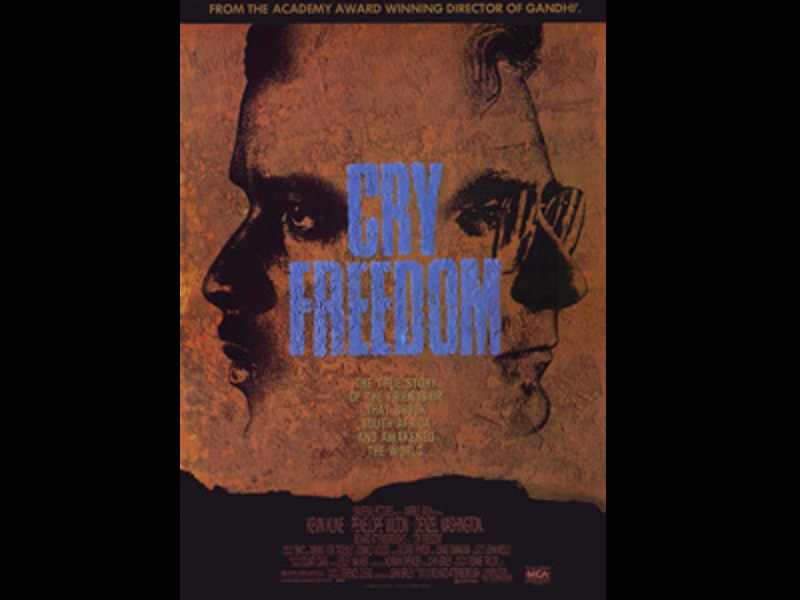 Cry Freedom is a 1987 British drama film directed by Richard Attenborough, set in the late 1970s, during the apartheid era of South Africa. It was written from a screenplay by John Briley based on a pair of books by journalist Donald Woods. The film centres around the real-life events involving black activist Steve Biko and his friend Donald Woods, who initially finds him destructive, and attempts to understand his way of life. Denzel Washington stars as Biko, while actor Kevin Kline portrays Woods. Cry Freedom delves into the ideas of discrimination, political corruption, and the repercussions of violence.

The film was primarily shot on location in Zimbabwe due to political turmoil in South Africa at the time of production. As a film showing mostly in limited cinematic release, it was nominated for multiple awards, including Academy Award nominations for Best Actor in a Supporting Role, Best Original Score, and Best Original Song. It also won a number of awards including those from the Berlin International Film Festival and the British Academy Film Awards.
Following a news story depicting the demolition of a slum in East London, South Africa, journalist Donald Woods (Kevin Kline) seeking more information about the incident, ventures off to meet black activist Steve Biko (Denzel Washington). Biko has been officially banned by the South African government and is not permitted to leave his defined banning area at King William's Town. Woods is formally against Biko's banning, but is still critical of his political views. Biko invites Woods to visit a black township to see the impoverished conditions and to witness the effect of the government imposed restrictions which make up the apartheid system. Woods begins to agree with Biko's desire for a South Africa where blacks have the same opportunities and freedoms as those enjoyed by the white population. As Woods comes to understand Biko's point of view, a friendship slowly develops between them.

After being arrested for speaking at a gathering of black South Africans outside of his banishment zone, Biko is arrested and interrogated by South African security forces. Following this, he is brought to court in order to explain his message directed toward the South African government. After speaking eloquently in court and advocating nonviolence, the security officers who interrogated him visit his church and vandalize the property. Woods assures Biko that he will meet with a government official to discuss the matter. Woods then meets with Jimmy Kruger (John Thaw), the South African Minister of Justice in his house in Pretoria in an attempt to prevent further abuse by the security force. Kruger first expresses discontent over the actions of security force, however Woods is later harassed by security forces at his home. The security men that harass Woods insinuate that their orders to visit Woods came directly from Kruger.
Later, Biko decides to travel to Cape Town to speak at a student-run meeting. While traveling, his car is stopped and he is arrested by security forces. He is held in harsh conditions and beaten, causing a severe brain injury. A doctor recommended that he be taken to a nearby specialist in order to best treat his injuries, but the police refuse due to fear that he might escape. This would have been nearly impossible, considering that the severity of his injuries left him with nearly complete inability to move on his own. The security forces instead decide to take him to a prison hospital in Pretoria, around 700 miles away. He is thrown into the back of a prison van and driven on a bumpy road, aggravating his brain injury and resulting in his death.

Woods then works to expose the police's complicity in Biko's death. He attempts to expose photographs of Biko's body that contradicted police reports that he died of a hunger strike, but he is prevented just before boarding a plane to leave and informed that he is now banned, therefore not able to leave the country. Woods and his family are targeted in a campaign of harassment by the security police. He later decides to seek asylum in England to expose the corrupt and racist nature of the South African authorities. After a long trek, Woods is eventually able to escape to the country of Lesotho, disguised as a priest. His wife Wendy (Penelope Wilton) and their family later join him, and are flown to Botswana with the aid of Bruce Haigh (John Hargreaves), a controversial Australian diplomat who uses his diplomatic immunity to help them. In the film however Hargreaves' character is an Australian journalist.

The film's epilogue displays a graphic detailing a long list of anti-apartheid activists (including Steve Biko), who died under suspicious circumstances while imprisoned by the government. Contrary to popular belief, the listing's dates in the graphic actually stopped before the film's release, as the Apartheid government stopped releasing the increasing transparently false "official explanations" for deaths in custody.