Confessions of an Economic Hit Man by John Perkins 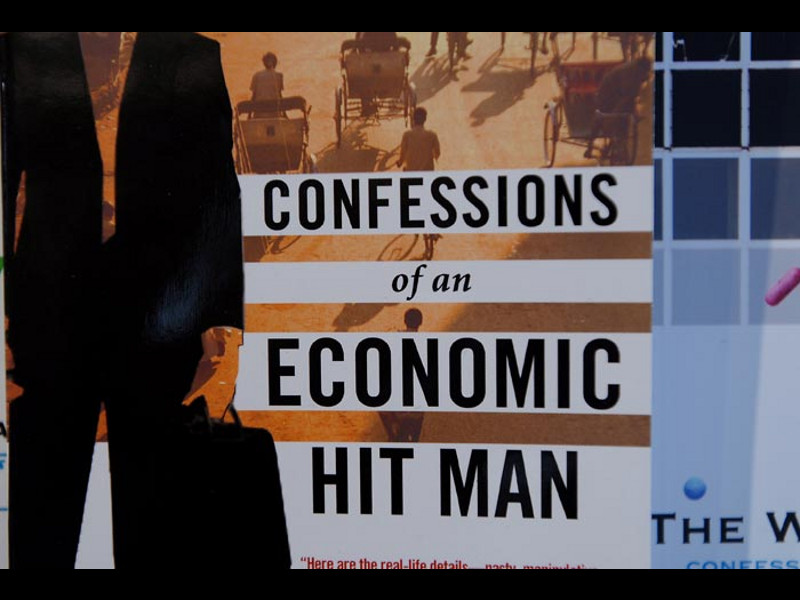 Confessions of an Economic Hit Man is a book written by John Perkins and published in 2004. It provides Perkins' account of his career with consulting firm Chas. T. Main in Boston. Before employment with the firm, he interviewed for a job with the National Security Agency (NSA). Perkins claims that this interview effectively constituted an independent screening which led to his subsequent hiring by Einar Greve, a member of the firm (and alleged NSA liaison) to become a self-described "economic hit man".

According to Perkins, he began writing Confessions of an Economic Hit Man in the 1980s, but "threats or bribes always convinced [him] to stop."

According to his book, Perkins' function was to convince the political and financial leadership of underdeveloped countries to accept enormous development loans from institutions like the World Bank and USAID. Saddled with debts they could not hope to pay, those countries were forced to acquiesce to political pressure from the United States on a variety of issues. Perkins argues in his book that developing nations were effectively neutralized politically, had their wealth gaps driven wider and economies crippled in the long run. In this capacity Perkins recounts his meetings with some prominent individuals, including Graham Greene and Omar Torrijos. Perkins describes the role of an EHM as follows:
Economic hit men (EHMs) are highly-paid professionals who cheat countries around the globe out of trillions of dollars. They funnel money from the World Bank, the U.S. Agency for International Development (USAID), and other foreign "aid" organizations into the coffers of huge corporations and the pockets of a few wealthy families who control the planet's natural resources. Their tools included fraudulent financial reports, rigged elections, payoffs, extortion, sex, and murder. They play a game as old as empire, but one that has taken on new and terrifying dimensions during this time of globalization.
The epilogue to the 2006 edition provides a rebuttal to the current move by the G8 nations to forgive Third World debt. Perkins charges that the proposed conditions for this debt forgiveness require countries to privatise their health, education, electric, water and other public services. Those countries would also have to discontinue subsidies and trade restrictions that support local business, but accept the continued subsidization of certain G8 businesses by the US and other G8 countries, and the erection of trade barriers on imports that threaten G8 industries.

In the book, Perkins repeatedly denies the existence of a "conspiracy." Instead, Perkins carefully discusses the role of corporatocracy. – November 4, 2004 interview
I was initially recruited while I was in business school back in the late sixties by the National Security Agency, the nation’s largest and least understood spy organization; but ultimately I worked for private corporations. The first real economic hit man was back in the early 1950s, Kermit Roosevelt, Jr., the grandson of Teddy, who overthrew the government of Iran, a democratically elected government, Mossadegh’s government who was Time‘s magazine person of the year; and he was so successful at doing this without any bloodshed—well, there was a little bloodshed, but no military intervention, just spending millions of dollars and replaced Mossadegh with the Shah of Iran. At that point, we understood that this idea of economic hit man was an extremely good one. We didn’t have to worry about the threat of war with Russia when we did it this way. The problem with that was that Roosevelt was a C.I.A. agent. He was a government employee. Had he been caught, we would have been in a lot of trouble. It would have been very embarrassing. So, at that point, the decision was made to use organizations like the C.I.A. and the N.S.A. to recruit potential economic hit men like me and then send us to work for private consulting companies, engineering firms, construction companies, so that if we were caught, there would be no connection with the government.

Freedom next time, by John Pilger
Gaia – a new look at life on earth, by James Lovel...