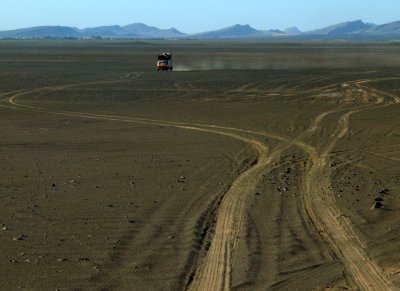 A story of a bus group traveling in Asia, meeting 2 Afghan men with a child at a deserted roadside carrying the load of a very sick child - a desperate meeting posing the question why children die from hunger in the last half of the twentieth century.

"Henning, shouldn't we take him along?"

"Yes, let's do it. He is standing quite alone. Usually ten others will turn up when you stop."

The desert and the unbelievable heat probably did much for the fact that we could not drive past the Kuchi, who beckoned ys in a way that sort of urged us to stop. From where did he come? In a place where we could see nothing else but the totally flat, shimmering sand - and the stony desert?

The bus stopped with the usual jerk a little past the man - his white turban glided past the windows to finally disappear. Eddy leaned forward through the door and shouted "Dilaram?" At the name of the next city, the man shook his head and said without any facial expression but with great seriousness: "Girisk".