Getting started as volunteers in Mozambique An unexpected responsibility, which was bestowed upon us was the annual Olympic Games

After a long travel, we finally set foot in Mozambique. We were taken to the ADPP (Humana People to People in Mozambique) Headquarters, where we received a warm welcome from the whole ADPP team. The two following days were spent participating in the building weekend, where our team of three worked together with EPF Maputo. It was then when we started to get a sense of what these next six months are going to be like for us. These were the days we spent with virtually no internet at all with our families probably worried sick. Afterwards, the Development Instructor responsible organized local SIM-cards for us so now we are all happily connected to the local 4G. The days in the NHQ were spent finalizing documents and shopping for essentials while getting to know the capital at the same time.
We left Maputo at four o’clock in the morning on 23rd of July. That same bus drove us all the way to Quelimane. We got a first taste of the sunrises and the sunsets of Mozambique, which are nothing like the ones in Europe. We also practiced our Portuguese on the way and people seemed to find us entertaining. You can ask us about cobras and muzungus if you want to know more. After a thirty six-hour bus trip we arrived in Quelimane on the 24th, spent the night in a hotel and, at last, arrived at our new home Macuse on the eve of the 25th.

Starting up teaching at the Teachers Training College in Macuse 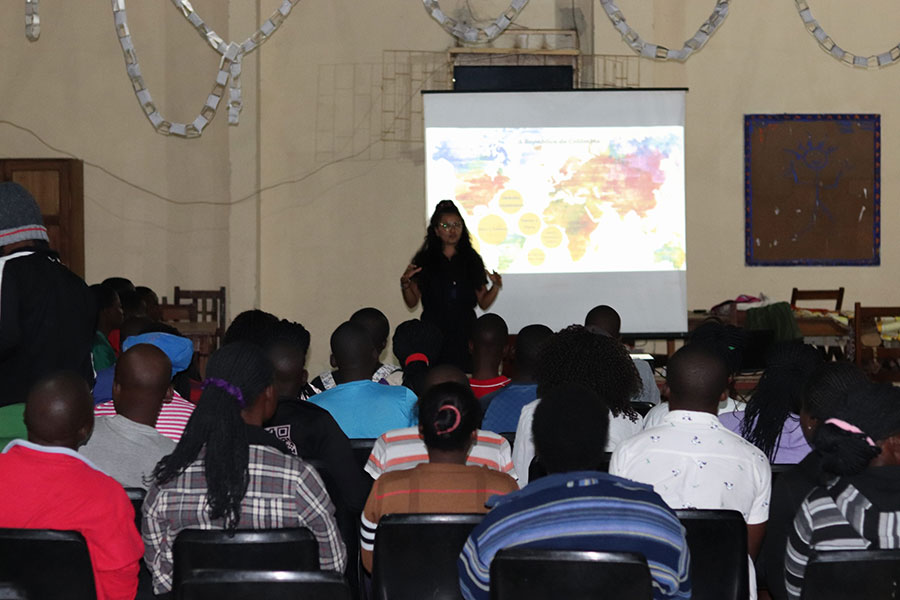 We were introduced to the students the following day. We realized quickly that the whole EPF Macuse family expects a lot from us. Our project leader, the headmistress, repeated over and over how the students and the staff have to learn as much as they can from each of us. That first week was spent settling ourselves in, and getting to know our students bit by bit. Our first action was tree planting, where each of us went with separate classes to different communities. Solveig was the first one to fall sick and take a negative Malaria test. Paola also visited the hospital for the same purpose a few days after. Both illnesses were probably the fault of acclimatization, they passed rather quickly. Our first responsibility as teachers was to grade an oral exam. The topic was climate change. All of us quickly came to see how bright our students are, sending us to a bit of a downward spiral on “what can we possibly teach them that they don’t know?”.
It turns out we can teach them a lot. The first thing they got to learn about was Colombia, a presentation by Paola. Afterwards, we also made a presentation about Malaria, concluding the topic with an interactive game. For English lessons, we divided the classes between ourselves. Paola teaches classes B and D, Oxana classes E and F, and Solveig classes A and C. Right now we have one lesson per week, and they are learning fast. All of us also have a class, which we have to stay close to until they graduate. Paola has class B, Oxana class F, and Solveig class C.

An unexpected responsibility, which was bestowed upon us was the annual Olympic Games. Solveig became a basketball coach with the help of Paola. Oxana became responsible for decorations for the Games. The problem with this was the lack of a previous organization. The basketball team had no previous knowledge of basketball, just a week before the Olympic Games were supposed to start. Nevertheless, we gave them everything we had to offer and prepared them as best as we could. Basketball practice took place every single day. It was a challenge to make the students arrive there on time, but when they were there, they learned everything fast. Considering the circumstances, their end result was great.
There were four other schools, who came here for the Olympic games. It was visible how they had had a better preparation. The Games lasted 2 days, during which we got to meet loads of new people and had a great deal of fun. An event that is organized in our school weekly is the Cultural Night.

Cultural nights and Club Nights with the students

Each week, one class is responsible for preparing the Cultural Night, where every person has a chance to show off a talent or prepare a group performance. The school let us know that the Cultural Night during the Olympic games has to be extraordinary so Paola prepared a choreography with a group of students. Solveig joined the student choir and taught them “The Lion Sleeps tonight” Oxana sang solo with a guitar. Paola also performed Salsa with a student. With our performances together with all the others, the Cultural Night was indeed extraordinary.
After the Olympic games ended, three teachers were unable to attend lessons so we became their substitutes. Solveig became the physical education teacher, Oxana gave classes about human trafficking and the history of art with the help of Paola, and Paola took over the classes of visual education. This was the week of the 12th August. Solveig had 4 lessons a day, diversifying their physical education classes, which were so far just gymnastics and occasional football. Paola taught her students about 3D drawing and shadowing. Oxana gave them captivating theory laced with interactive games. Tuesdays are Club Nights, and all of us now have Clubs to take care of, additionally to our classes. Oxana established a French club, where the aim is to learn French, Paola continues to work with the dancers and Solveig with the choir. Our new objective is to prepare performances for the theatre festival in September.
There is a lot we hope to be able to accomplish in our project. We already understand the key problems and the strong points of the school. There is a fine line between being friendly with the students and them disrespecting you as a teacher. That line is where many problems start.

6 amazing months volunteering with DAPP Zambia
Next stop Mozambique - our team of volunteers are ...