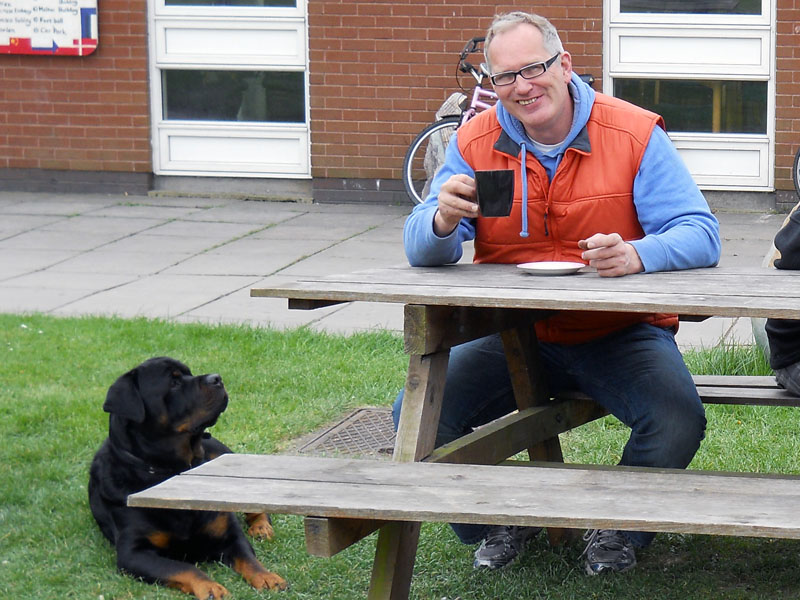 The manager of the clothes and shoes collection at CICD is Rolf Jakobsson. He has been here at Winestead Hall since 1994, when he was a teacher in the Small School the Sailors. After the Small School closed, Rolf and Karen Barsoe decided to start CICD.

“ My name is Rolf Harald Jakobsson.
I was born in 1963 in the north of Sweden.
I have been working with Development projects since I left school.
I have worked in these different  countries: Malaysia, Guinea Bissau,  India, Denmark,  Sweden and the UK .
When I was growing up during the 70ies in Sweden we learned very much about the situation in the world.
I especially remember how the teacher was telling us about the terrible war which was going on in Vietnam where  the Americans dropped more bombs on the civil population then was dropped by all countries  during the whole 2nd World War.
I also learned a lot about the dictatorships in Chile, in Greece and in Spain.

Another historic event which made a huge impact on me was the slaughter of the native population in the Americas during the last centuries.

All this information about the injustices in the world made me want to do something useful with my life which would made the world a better place to live in.
I look forward to be a teacher in this new programme  “Fighting with The Poor” where students will come to learn a lot about what is going on in the world right now, as well as to learn about many different events which has lead up to the situation today.

But the best is probably that all this knowledge will be transformed into practical action, as well as being a very useful  tool, to understand more of the world when:
-  The students  are travelling over land to the different projects they are going to work in.
-When the students come to the projects in Africa.
- During the rest of the lives in, all kind of situations.

A few quotes from one of my favourite movies  - “Into the Wild”:

I'm going to paraphrase Thoreau here: “... rather than love, than money, than faith, than fame, than fairness... give me truth. “

“The core of mans' spirit comes from new experiences.”

“No phone, no pool, no pets, no cigarettes”