As well explained by the philosopher from Spain, Paul B. Preciado, in his last article about the relation between Coronavirus and bio-politics:

“The politics of one country can be defined by the way that they confront a pandemic” - and we can see the real face of many governments: the sacrifice of the working class.
The sacrifice has existed since many years and though it has been in connection with the religion, it has always been a political decision. To decide who dies and who lives facing a threat is political.
Cultures around the world sacrificed people to ask for mercy or in tribute. The big difference between nowadays and the past is that the sacrifices now is forced and blind, which is totally contradictory with the etymology that means: “sacred act”.

When we think about sacrifice, we normally look back to the Babylonian times or the time of the Aztecs. But not far back in time, only 60 years ago, in 1960 in a little town in south of Chile, the mapuche people made a sacrifice of one little child called Juan Painecur after the biggest earthquake in the human history. 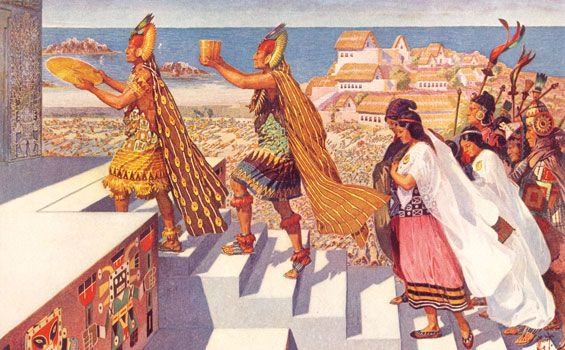 It was made by the “machi” (healer) Juana Namuncura, with the objective to put end the terrible telluric movements and tidal waves.
Also, not far back time, inside of the last nomadic tribes in Paraguay there was a person in charge of killing the old people who were a burden for the community. This was a political decision and a community pact, everybody know that when the time comes, a young person will come and end your life.

Going further back in time, the Incas in Peru sacrificed a dozen children per year as a tribute to the Sun God. The wars are also a kind of sacrifice and there are a political decisions made about who to send or not to send, to the battlefield. A very clear example were the Kamikazes in Japan (suicide bomber pilots) during the second world war.
Most of this political decisions are pursuing the “good” for all the community. In the Incas vision, to die in this ceremony was an honour. They selected the children all because the well-being of the big community. Also for the Kamikazes, to die for the country was a big honour and a symbol of courage, like many a king in the middle ages who fought in the battlefield giving his life for his country.

Sacrifice through history – and now

On the other side, there are many examples of leaders sacrificing the population for their own well being. This is what we can see in the actual political decisions of neo-liberal governments, prioritizing the economy instead of the people when they face COVID-19.
In my country, Chile, the most neoliberal country in the world, the decisions of the Sebastian Piñera Government show clearly their position regarding the life of the people. They quarantined only a couple of municipalities in the capital, only the sites where the elite of the country live.
To take this decision is to give only the rich people the possibility to live and survive this pandemic.

For them it is necessary that the working class continue producing for the benefit of these few people, who can stay at home.
The big difference between Sebastian Piñera's decisions and the other examples of sacrifice is first of all that there is no desire from the Chilean people for the sacrifice, and secondly: most of history shows a small group of people who sacrifice their life for rest. In this case it is the big community, the working class,who are sacrificing their life for a small number of people.

This massive sacrifice of the many for the few started with the Spanish Colonialism in the XV century and then it intensified with capitalism and the industrial revolution. But in this last case this sacrifice was hidden behind economic possibilities, behind a small salary. During this last three hundred years the ruling class has sacrificed or kept in poverty, systematically, a big number of impoverished people, consuming their lives by unkept promises.

The quarantine is a privilege of the ruling class

This global vision, copied by the liberalist local government, show the quarantine as a privilege of the ruling class.
People who work in the streets, industries, fields, hospitals, gasoline stations, etc. are being sacrificed. So are the migrants, and the poor.
The quarantine is a privilege.

Finally, to add from my experience in Malawi in Africa, where I was a volunteer for 5 months, I realised that a big percentage of the people have no protection and they have to continue working. The only country in real quarantine is South Africa, who has the best economy in the region. But also there, the majority of the population is poor and have to continue working....In South Africa they have also the instrument to detect the virus, while the rest of the Sub-Saharan Africa does not have the necessary equipment to detect the virus in a big scale.
If we look at the different realities in the daily life in different continent that I’ve been, you can say, in general, that the Malawians work from day to day, Latin-américans from week to week and people in countries in Europe and USA from year to year – but this is not at all everybody.

Coming back to the Chilean case, here the global structure is reproduced in local scale. The Many have to continue working for the elites.

It is time that we understand that a life system, which has profitmaking as a central axis, produce inequality and is really the sacrifice of the global community for the survival of the rich people.
Is it time to rethink the idea of “community”? I think it is obvious, because the concept of “community” has basically disappeared. Maybe if we ask our leaders and kings and presidents to fight with courage on the front line on the battlefield and not to sacrifice others, the world would be a better place.

Studies and workshops in lock down CICD ...
Why gardening? Because in exchange of your work yo...