The Problem is Civil Obedience, Speech by Arthur Zinn

Parts of speech by Howard Zinn 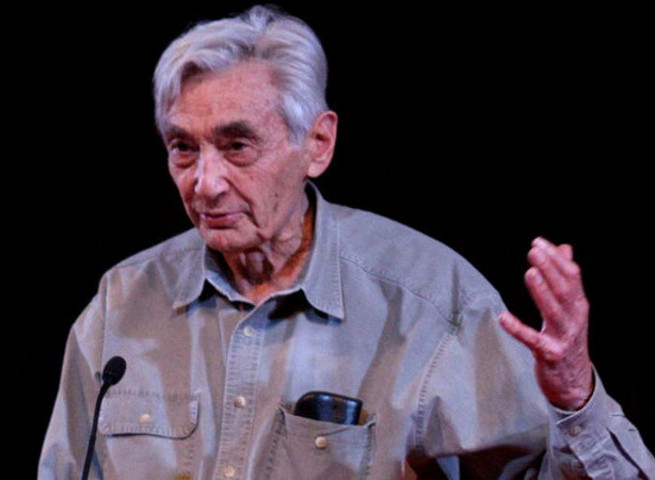 I start from the supposition that we don't have to say too much about this because all we have to do is think about the state of the world today and realize that things are all upside down. Daniel Berrigan is in jail-A Catholic priest, a poet who opposes the war-and J. Edgar Hoover is free, you see. David Dellinger, who has opposed war ever since he was this high and who has used all of his energy and passion against it, is in danger of going to jail. The men who are responsible for the My Lai massacre are not on trial; they are in Washington serving various functions, primary and subordinate, that have to do with the unleashing of massacres, which surprise them when they occur.

At Kent State University four students were killed by the National Guard and students were indicted. In every city in this country, when demonstrations take place, the protesters, whether they have demonstrated or not, whatever they have done, are assaulted and clubbed by police, and then they are arrested for assaulting a police officer.

If you don't think, if you just listen to TV and read scholarly things, you actually begin to think that things are not so bad, or that just little things are wrong. You lose your perspective after a while. But you have to get a little detached, and then come back and look at the world, and you are horrified. So we have to start from that supposition-that things are really topsy-turvy.

And our topic is topsy-turvy: civil disobedience.

We recognize this for Nazi Germany. We know that the problem there was obedience, that the people obeyed Hitler. People obeyed; that was wrong. They should have challenged, and they should have resisted; and if we were only there, we would have showed them. Even in Stalin's Russia we can understand that; people are obedient, all these herdlike people.

But America is different. That is what we've all been brought up on. From the time we are this high and I still hear it resounding in Mr. Frankel's statement-you tick off, one, two, three, four, five lovely things .~ about America that we don't want disturbed very much. But if we have learned anything in the past ten years, it is that these lovely things about America were never lovely.

We have been expansionist and aggressive and mean to other people from the beginning. And we've been aggressive and mean to people in this country, and we've allocated the wealth of this country in a very unjust way. We've never had justice in the courts for the poor people, for black people, for radicals. Now how can we boast that America is a very special place? It is not that special. It really isn't.

Well, that is our topic, that is our problem: civil obedience. Law is very important. We are talking about obedience to law - law, this marvelous invention of modern times, which we attribute to Western civilization, and which we talk about proudly.

When in all the nations of the world the rule of law is the darling of the leaders and the plague of the people, we ought to begin to recognize this.
We have to transcend these national boundaries in our thinking. Nixon and Brezhnev have much more in common with one another than - we have with Nixon. J. Edgar Hoover has far more in common with the head of the Soviet secret police than he has with us. It's the international dedication to law and order that binds the leaders of all countries in a comradely bond. That's why we are always surprised when they get together -- they smile, they shake hands, they smoke cigars, they really like one another no matter what they say.

We are asked, "What if everyone disobeyed the law?" But a better question is, "What if everyone obeyed the law?"
And the answer to that question is much easier to come by, because we have a lot of empirical evidence about what happens if everyone obeys the law, or if even most people obey the law. What happens is what has happened, what is happening. Why do people revere the law? And we all do; even I have to fight it, for it was put into my bones at an early age when I was a Cub Scout. One reason we revere the law is its ambivalence. In the modern world we deal with phrases and words that have multiple meanings, like "national security." Oh, yes, we must do this for national security! Well, what does that mean? Whose national security? Where? When? Why? We don't bother to answer those questions, or even to ask them.

But there is another part of the law that doesn't get ballyhooed- the legislation that has gone through month after month, year after year, from the beginning of the Republic, which allocates the resources of the country in such a way as to leave some people very rich and other people very poor, and still others scrambling like mad for what little is left.

That is the law. If you go to law school you will see this. You can quantify it by counting the big, heavy law books that people carry around with them and see how many law books you count that say "Constitutional Rights" on them and how many that say "Property," "Contracts," "Torts," "Corporation Law." That is what the law is mostly about.

But the order based on law and on the force of law is the order of the totalitarian state, and it inevitably leads either to total injustice or to rebellion - eventually, in other words, to very great disorder.

We all grow up with the notion that the law is holy. They asked Daniel Berrigan's mother what she thought of her son's breaking the law. He burned draft records-one of the most violent acts of this century- to protest the war, for which he was sentenced to prison, as criminals should be. They asked his mother who is in her eighties, what she thought of her son's breaking the law. And she looked straight into the interviewer's face, and she said, "It's not God's law." Now we forget that. There is nothing sacred about the law. Think of who makes laws. The law is not made by God, it is made by Strom Thurmond. If you nave any notion about the sanctity and loveliness and reverence for the law, look at the legislators around the country who make the laws. Sit in on the sessions of the state legislatures. Sit in on Congress, for these are the people who make the laws which we are then supposed to revere.

All of this is done with such propriety as to fool us. This is the problem. In the old days, things were confused; you didn't know. Now you know. It is all down there in the books. Now we go through due process. Now the same things happen as happened before, except that we've gone through the right procedures.

In Boston a policeman walked into a hospital ward and fired five times at a black man who had snapped a towel at his arm - and killed him. A hearing was held. The judge decided that the policeman was justified because if he didn't do it, he would lose the respect of his fellow officers. Well, that is what is known as due process - that is, the guy didn't get away with it. We went through the proper procedures, and everything was set up. The decorum, the propriety of the law fools us.

What we are trying to do, I assume, is really to get back to the principles and aims and spirit of the Declaration of Independence.
This spirit is resistance to illegitimate authority and to forces that deprive people of their life and liberty and right to pursue happiness, and therefore under these conditions, it urges the right to alter or abolish their current form of government-and the stress had been on abolish.
But to establish the principles of the Declaration of Independence, we are going to need to go outside the law, to stop obeying the laws that demand killing or that allocate wealth the way it has been done, or that put people in jail for petty technical offenses and keep other people out of jail for enormous crimes.

My hope is that this kind of spirit will take place not just in this country but in other countries because they all need it. People in all countries need the spirit of disobedience to the state, which is not a metaphysical thing but a thing of force and wealth. And we need a kind of declaration of interdependence among people in all countries of the world who are striving for the same thing.