Changing the world one life at a time

May 05 Posted by CICD in Activism Joe Solo runs We Shall Overcome together with Pauline Town

Joe Solo is an award-winning musician, writer, poet, activist, broadcaster and washing machine engineer from Scarborough in north-east England.
Together with Pauline Town and many other activists and musicians, Joe Solo runs the We Shall Overcome (WSO) movement. He uses his skills as a musician and song writer to raise much needed funds as well as spirits, all around the country. The aim is to support people living in poverty, who ended up homeless and need a helping hand to get back on their feet.
“The Station Hotel”, a pub in Ashton under Lyne in Manchester run by Pauline Town, who together with Joe Solo the motor in this movement, is a hub for it all – for people and agencies with possibilities to give help, and for the people needing help to get a roof over their head and food.

Changing the world, one life at a time

Since May 2015 We Shall Overcome (WSO) organisers have run more than 1100 events in 150 different towns and cities, raising an estimated £500,000 worth of food, cash, clothing, bedding, furniture and electrical goods for those struggling at the sharp end of Tory Austerity. Working together with local authorities and a large network of local volunteers, Pauline and WSO have housed 382 homeless people (actually more, as some are families!) until now, 1st May 2020!! 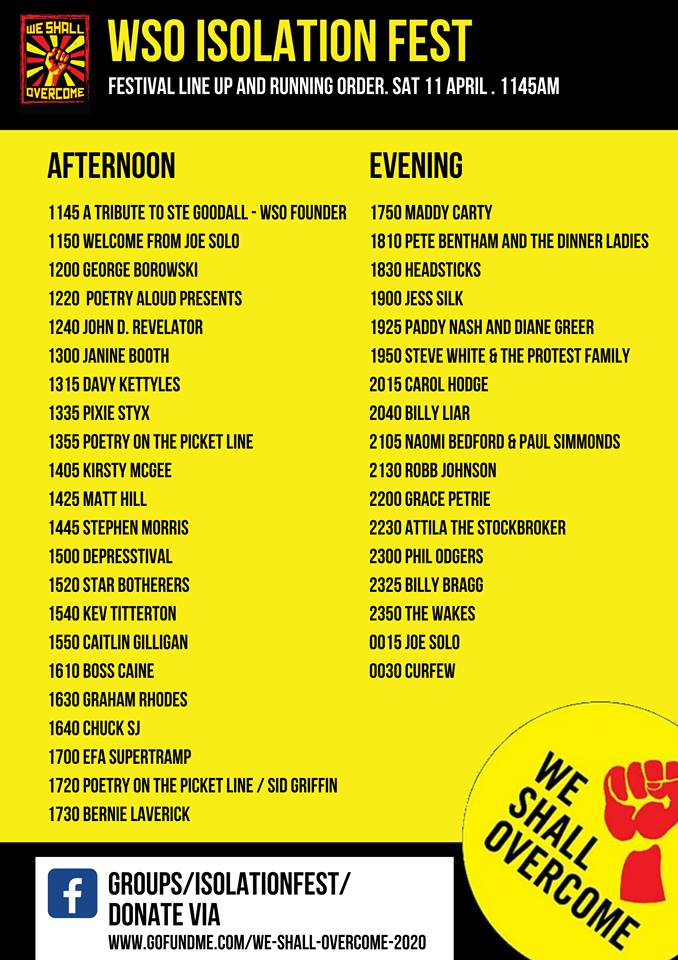 The number of people in England being made homeless has been steadily growing for many years. During the present Covid19 pandemic, more and more people are thrown into poverty and the situation for someone who is homeless is now more dangerous than ever.
During this period it is also impossible to use the well known methods of live gigs and face-to-face fund raising... but this does not stop We Shall Overcome!
Saturday 11th of April they held a big virtual “WSO Isolation Festival” with performances from 40 singers and musicians from 10.00 – 00.30 next morning, as a constant series of slots of live streamed performances. The 25.000 members in the Facebook group could enjoy the live streamed festival from in their home – and in the end it raised £ 26,177 for the very essential outreach work of WSO in Greater Manchester!

Here you find We Shall Overcome on Facebook: https://www.facebook.com/weshallovercomeweekend/

Joe Solo has published around 20 albums, some of them with his former band Lithium Joe.
The main thread through the songs is the struggle of the working classes and the fight for justice and decent conditions. There are many life stories brought to life in these songs, and much beautiful poetry and fighting spirit!

One recent album is Headscarves and Hurricanes. It is based on the book The Headscarf Revolutionaries – a story that should be widely known, but is not:

“ In the harsh seas of 1968, three trawlers from Hull sank in just three weeks. 58 men died. That broke the heart of many in the city.
One fishwife put down her filleting knife, picked up some sheets of paper, and stormed into action. Lilian Bilocca started with a petition, took her battle to the docks at dawn, and then led a raid on Parliament. Lilian and her team of women changed the Shipping Laws.
In just a few days of action, the lives of thousands of seamen were made much safer. She became a TV star and an international celebrity. It is hard to live down fame like that in the back streets of Hull. It was harder still for the one man who battled the storms as the trawlers sank to be the lone survivor. The Headscarf Revolutionaries thrills with the dangers of the high seas; inspires with the passion of women who changed their world; and reveals the vivid life inside one of the most vital communities of recent history. “ (quote from online seller)

Here is a link where you can listen for free (or buy & support) this album online: https://joesolomusic.bandcamp.com/album/headscarves-hurricanes
Below the lyrics to one of the songs:

Chorus:
Like a headscarf on a hurricane
They took them on alone
If there is no revolution
Then you start one of your own

Big Lil and her petition
It started in the Cri
And ended up in parliament
Where changes go to die
But she told Mr Wilson:
"Love, this is down to you.
We've come all this way to change the law
And I'll stand here til you do."