'Not to share wealth with poor is to steal': Pope slams capitalism as 'new tyranny' 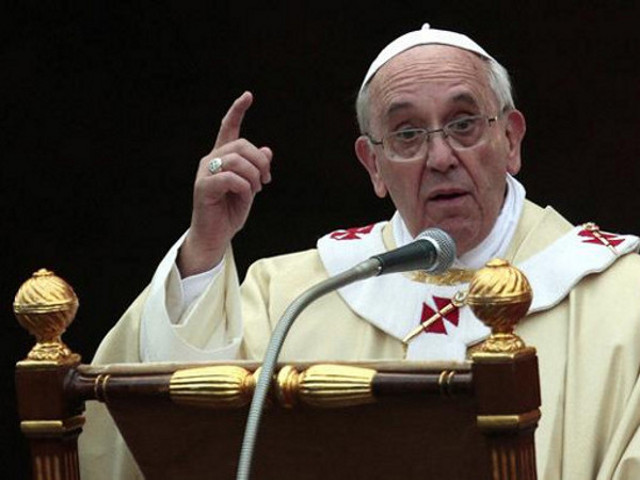 Pope Francis has taken aim at capitalism as "a new tyranny" and is urging world leaders to step up their efforts against poverty and inequality, saying "thou shall not kill" the economy. Francis calls on rich people to share their wealth.

The existing financial system that fuels the unequal distribution of wealth and violence must be changed, the Pope warned.

"How can it be that it is not a news item when an elderly homeless person dies of exposure, but it is news when the stock market loses two points?" Pope Francis asked an audience at the Vatican.

The global economic crisis, which has gripped much of Europe and America, has the Pope asking how countries can function, or realize their full economic potential, if they are weighed down by the debts of capitalism.

“A new tyranny is thus born, invisible and often virtual, which unilaterally and relentlessly imposes its own laws and rules,” the 84-page document, known as an apostolic exhortation, said.

"To all this we can add widespread corruption and self-serving tax evasion, which has taken on worldwide dimensions. The thirst for power and possessions knows no limits", the pope’s document says.

He goes on to explain that in this system, which tends to devour everything which stands in the way of increased profits, whatever is fragile, like the environment, is defenseless before the interests of a deified market, which has become the only rule we live by.

Inequality between the rich and the poor has reached a new threshold, and in his apostolic exhortation to mark the end of the “Year of Faith”, Pope Francis asks for better politicians to heal the scars capitalism made on society.

"Just as the commandment 'Thou shalt not kill' sets a clear limit in order to safeguard the value of human life, today we also have to say 'thou shalt not' to an economy of exclusion and inequality. Such an economy kills," Francis wrote in the document issued Tuesday.

His calls to service go beyond general good Samaritan deeds, as he asks his followers for action “beyond a simple welfare mentality".

"I beg the Lord to grant us more politicians who are genuinely disturbed by the state of society, the people, the lives of the poor,” Francis wrote.
A recent IRS report shows that the wealth of the US’s richest 1 percent has grown by 31 percent, while the rest of the population experienced an income rise of only 1 percent.

The most recent Oxfam data shows that up to 146 million Europeans are at risk of falling into poverty by 2025 and 50 million Americans are currently suffering from severe financial hardship.

"As long as the problems of the poor are not radically resolved by rejecting the absolute autonomy of markets and financial speculation, and by attacking the structural causes of inequality, no solution will be found for the world's problems or, for that matter, to any problems," he wrote.

Named after the medieval saint who chose a life of poverty, Pope Francis has gone beyond general calls for fair work, education, and healthcare.
Newly-elected Pope Francis has stepped up the fight against corrupt capitalism that has hit close to home - he was the first Pope to go after the Vatican bank and openly accused it of fraud and shady offshore tax haven deals.