By Diego Dusetti, from investigation trip with his team, October 2018 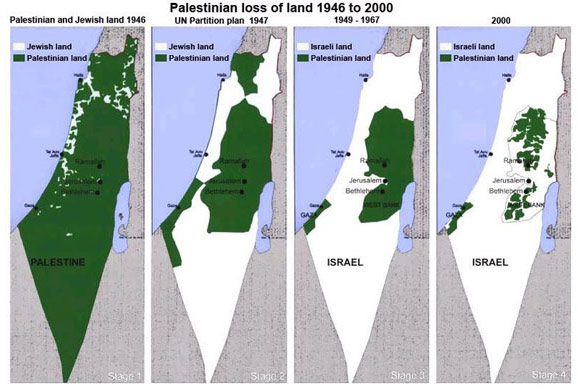 (picture credit: www.snipview.com)
This is the map of how Israel has been taking land from Palestine. As you can see from 1946 to 2000 the Palestinian area has been reducing a lot: everything started when a small group of Jewish people who went to Palestine for few days with the excuse to visit the country; they were staying in a Hotel that they never left. After them, soldiers started to come with the goal of colonizing the country. Since that moment until now, different conflicts have been happening between the two countries.

Today, Palestine is separated in two:

The West Bank is surrounded by a 5 m high wall which was built by Israel in 2002 for security reasons; the wall has some towers and cameras to guarantee the control 24/7. To go inside Palestine you must cross a check point monitored by soldiers where they have the task to check who is coming and who is going; that was the first thing I did when I entered Palestine.In the two weeks my team and I spent there, we had different activities. The reason why we went there was to understand the situation of the conflict better and to help the Lajee community centre: we mainly worked on the roof building a shed, painting, building a vertical garden. The location of the centre is very near the wall where there are also 2 towers and a gate where only the soldiers can pass through.

On the first day I went to the University of Bethlehem where one of the teachers was explaining us the story of the conflict between Israel and Palestine, how many times he was arrested, and his personal opinion about this war. In the University there is an exhibition of animals and insects that have been decreasing since a new settlement was established on a hill not too far from the University.
A settlement is a part of Palestine where the people from Israel have moved in to live, they should be illegal but the Israeli Government gives the permission to do it and after the settlers are placed, it will be under the protection of soldiers. In one of the free days we went to Hebron which is a good example to explain the settlements. Inside this city there are some areas which are controlled by the Israeli army, in every access from the street there is a check point where everybody has to go through. In some streets the access is denied to the Palestinian people. It is also allowed for the Israeli people to carry a gun and shoot in case they feel threatened by Arabs. We spent some time talking with a man who has had his shop in one of these areas since the invasion of the soldiers and he was explaining how hard the life is for the Palestinian and how the soldiers abuse them.


Another problem that the people in the West Bank and the Gaza strip have to live with, is the lack of water. They don’t have direct access to the public water but it is the Israeli Government who is in control of it. The water runs through Palestine only once every two or three weeks, in that day the population has to fill up the tanks they have on the roof of each house. If they run out during this period they can not use water unless they buy it from a private company at higher price.
To conclude: before to have this experience I had a completely different opinion about this conflict. Documentaries, movies, speeches and other information can not give a proper idea of how it is in reality. The Palestinians have been removed from their land and forced to live in places decided by somebody else and are still under the constant control of the soldiers that can act in any moment for any reason. The freedom has been stolen from this country and also the primary needs, like the water, are in control of somebody else; we can say that they are living in an open air prison.
PRINT