4 short stories from life in Palestine

Nov 26 Posted by CICD in Archive 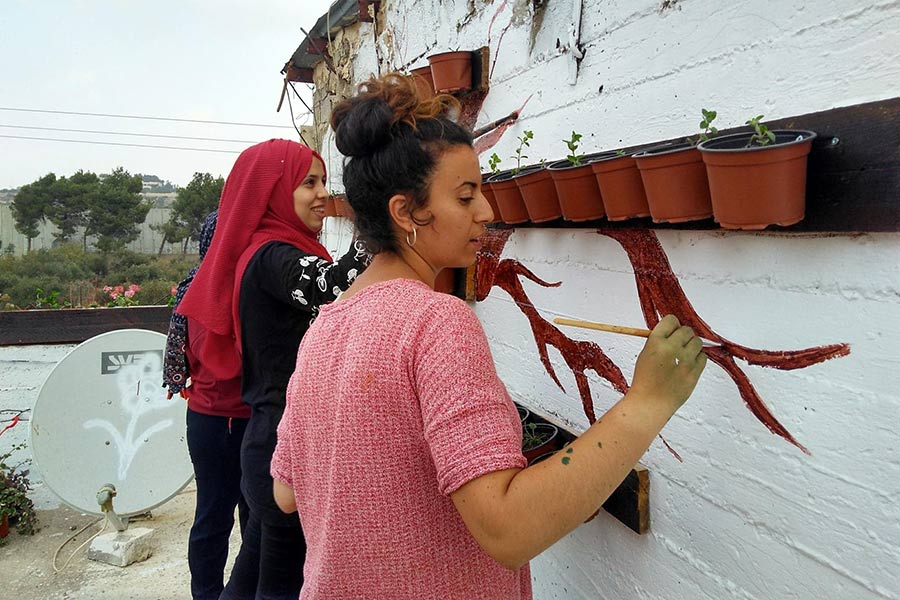 The man in front of the wall

I wanted to spend the last morning before coming back to England taking more pictures inside the camp, going around and speaking with people in Aida Camp. I went one more time near the wall and while I was reading one of the stories written there, I turned my head and I saw one man sitting on his chair who invited me to sit next to him, in his small mechanical workshop.
Mohammed was born in Bethlehem and his business was really good before the construction of the wall. “I could see Jerusalem from this chair. It was only five minutes from here”, he said nostalgic. Now he can not see anything other than the wall and he spends the day sitting in his chair seeing how the tourists take pictures of this construction and waiting for customers to appear to have something to do with his hands. His family is divided between Bethlehem and Jerusalem but he can not visit them much as he needs a permit to go to Israel.
He gives me his hand and I can feel his sadness. I wish him all the luck in the world and I promise him that I will tell people in Spain how life is in Palestine, I will tell them to boycott Israel, I will tell them how unfair the world is to the Palestinians.

Tyres for planting, not for demonstrations

I was taking up tyres with a rope from the garden to the terrace in Lajee center. The idea was to paint them, covering some rusty irons and then put plants and flowers inside these tyres to make the terrace more beautiful and colourful. The Israeli watchtower was a few meters away and they control any movement, we began to see how six soldiers crossed the cemetery that is next to the garden to be placed in line directly in front of us, by the wall that separates the garden and the cemetery. I was doing this job with two Palestinian from the cultural center: Mahmud and Isra.
Mahmud has been shot in his knee and his foot by an Israeli soldier a few years ago. This had happened when he was working on the terrace of the center. To the house of Isra, the person in charge of the accounts in Lajee, Israeli soldiers have entered five times to inspect it. For both of them, the presence of the soldiers was normal, they made jokes to me about it, they laughed about the situation as they were used to being under surveillance. The presence of the soldiers made me uncomfortable, I knew that they were not going to do anything to us, just make us nervous, but the simple fact of knowing that they have the power to shoot whenever they want if they feel any threat, leave us in a position of inferiority and defencelessness.
When we finished our work, the soldiers left through the cemetery again and after a while someone called to Lajee from the Israeli government and the Palestinian Authority to know what we wanted to do with those tyres.

It was in 1987 during the first Intifada, when residents of Beit Sahour, near Bethlehem, wanted to boycott Israeli products. They bought 18 cows from an Israeli kibbutznik to create their own source of milk. One day an Israeli soldier came to the farm, took photos of the cows, and told the Palestinians they weren't allowed to have the cows and gave them 24 hours to shut it down. He said the cows were a threat to Israel's national security.
"For the Palestinians, the cows meant a step closer to being free, to being able to decide their future, to being independent. Basically this was the security threat for Israel. It's not the cow itself. It's what the cow represents: a step toward independence", says Mazin Qumsiyeh, founder of Museum of natural History in Bethlehem.
“Someone would see it as something stupid but it makes all the sense in the world. The inhabitants live from the cows and if you control the cows you control the people and control their territory. It is the same if you kill the buffalos: you influence in the emigration of the people and therefore in the control of the territory”.

After finishing the 2 weeks of volunteering, we were invited by the director of the Lajee center to his house to have dinner. Shala lives in a house near the center with his wife and his four children. The house has four floors, a very large living room, kitchen, the main room has its own bathroom and on its giant terrace his four year old daughter can ride the tricycle and take several turns around. His three year old son plays with the dozens of toys that are scattered on the floor.

From the terrace, the tallest building that can be seen is the Israeli watchtower. At night, a light coming from the tower and points from left to right and illuminates Shala's terrace from time to time. It is a light that reminds us of the lack of freedom, not only of this upper middle class family that lives in a kind of palace, but of the many others in the refugee camp that live under tight control night and day.